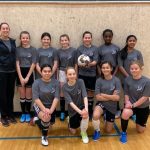 The Northwest Territories Soccer Association struggles to get women into coaching and specifically moving up through the ranks from community level coaching into the performance stream.  Lyric Sandhals, who is the executive director, says it is difficult to find coaches in general in the north, but it is particularly a problem for women in NWT.

One of the issues they face comes from the fact that the Northwest Territories is a transient community and people come and go.  Many leave to attend university or college and when they come back, it is hard to get them back into coaching.  They sometimes feel the game has changed and their skills haven’t kept up.

Sandhals applied for a grant to help put on a 40-hour intense C license coaching training in May 2019, bringing instructors into Yellowknife from BC and Saskatchewan.  The grant reduced course fees and covered some travel expenses for seven women to participate including six from Yellowknife and one from Fort Smith, a more remote and isolated community. In total, there were 23 participants receiving the coaching training including the seven women.

In 2018, Sandhals could only attract one woman to take C license coaching training.  With seven women taking the course in 2019 and all seven still actively involved in soccer as either coaches or managers, Sandhals calls the initiative a huge success.  A handful of the women have quickly moved up the ranks to coach or manage teams at major games.  The course gave them a boost of confidence, showed them they belonged and helped them connect with one another to share experiences.

Sandhals is hoping to put together an all-women C license coaching course for the first time in the history of the Northwest Territories.  She heard feedback from some of the participants about being intimidated at times in the course especially when they are being evaluated as they run actual practices and drills in front of their peers.

“They are definitely more confident running sessions and participating in an all-women environment especially if they haven’t been coaching for a while,” Sandhals says.

Keirra Alty has coached for many years at the community level but she didn’t feel qualified to apply for a coaching position at the Arctic Winter Games.  She needed to take the C license course to even be considered and with Sandhals’ encouragement, she put her name forward.

Alty, who has participated as an athlete three times in the Arctic Winter Games, twice in soccer, once in basketball, now realizes that experience has given her a unique perspective. She says the course took her coaching to a whole new level. It also showcased how the game has changed in the past decade and how to incorporate that into her coaching.

She walked away with new tools, resources and confidence.  As an elementary school teacher as well as a soccer coach in the Northwest Territories, she often encourages young girls to try sports and believes it is crucial that young girls there see themselves in these leadership roles.

“Growing up in soccer, almost all of my coaches were men,” Alty says.  She adds, “It’s definitely a different experience having a woman as your coach because you can relate to them in different ways.  So, I think it’s really positive and it’s a good thing to showcase women in coaching roles for these girls – to show them one day this is where you could be.”

Lori Rutherford-Simon is a mother of six from Fort Smith, an isolated community that is an eight hour drive from Yellowknife.

While she has remained involved in the sport as a Board member for Northwest Territories Soccer, she says she has not played the game in years.  Being from a remote part of NWT, she was grateful for the opportunity to attend the course because it is expensive to travel for coaching training.

Rutherford-Simon was recently part of the all-women coaching staff for the women’s soccer team that represented NWT at the Western Canada Summer Games. She was the manager and the head coach and assistant coach were also women, the first time Sandhals can remember that happening in her history with the Northwest Territories Soccer Association.

“I do think it was a fairly monumental moment or event,” Rutherford-Simon, who has five daughters and one son, says.  She adds, “  It’s really important to be able to see yourself in your role models.”

She has a message for other women potentially interested in coaching or in other leadership roles.

“I would say grab any and every opportunity that comes your way.  It can be very difficult to juggle a career like I’m a teacher – I work full time with children and coaching.  And I think sometimes, those are barriers for women.  It was a great and valuable learning experience for me.”